Gout is a common condition which is frequently misdiagnosed and managed sub-optimally despite excellent available treatments. It remains the only fully curable form of inflammatory arthritis. The prevalence and incidence of the disease has increased steadily in recent years, particularly in the UK, with an overall prevalence of 2.49% in 2012.

Gout is characterised by a raised uric acid level in the blood and subsequent deposition of urate crystals in joints causing gouty arthritis. It is important to note that hyperuricaemia may occur without gout and gout may be present without hyperuricaemia. 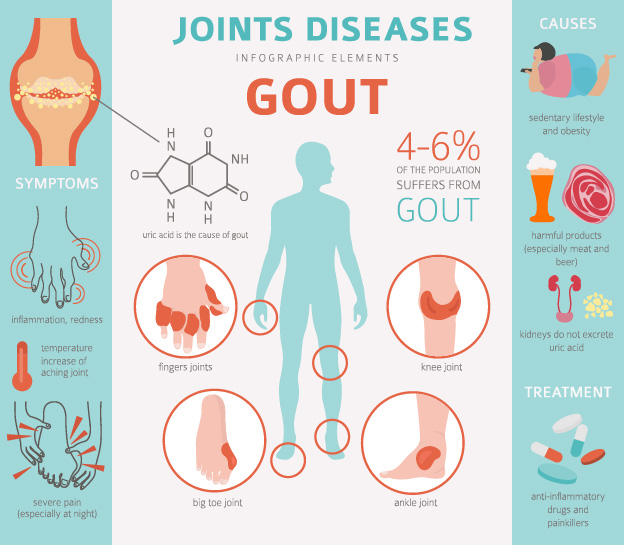 The natural history of gout generally follows three distinct phases: First a period of asymptomatic hyperuricaemia which is followed by acute attacks of gouty arthritis. These are of variable intervals between which time there may be no symptoms. The final period of chronic tophaceous gout, where people have nodules affecting joints, can lead to long-term disability as well as impaired health-related quality of life and an increase in all-cause mortality.

Any joints affected should be rested and elevated where possible. Patients need to be educated to understand that attacks need treating immediately and that and urate lowering treatment (ULT) should be continued. First line medication for acute attacks include NSAID at maximum dose or colchicine in doses of 500 µg two to four times daily where there are no contraindications. In cases of monoarticular gout, joint aspiration and injection of a corticosteroid are highly effective and should be carried out if possible. Other medications include oral steroids (30-40mg for one week) or intramuscular depomedrone (120mg).

It is vital to screen for cardiovascular risk factors and co-morbidities such as cigarette smoking, hypertension, diabetes mellitus, dyslipidaemia, obesity and renal disease. As discussed, these can be associated with gout and can worsen symptoms making it more difficult to treat. If diuretic drugs are being used to treat hypertension rather than heart failure, an alternative anti-hypertensive agent can be considered providing blood pressure is controlled.

ULT should be discussed and offered to all patients who have a diagnosis of gout. This is best delayed until any acute inflammation has settled down. The main indications for commencing ULT include two or more attacks a year, the presence of tophi, erosions seen on x-ray, young age, renal impairment or those on diuretics. The target level for uric acid in the blood is less than 300umol/L.

Allopurinol is the recommended first-line ULT. It should be started at a low dose (50−100 mg daily) and subsequently increased by 100 mg every 4 weeks or so until the serum uric acid target has been achieved (maximum dose 900 mg). Febuxostat can be used as an alternative second-line xanthine oxidase inhibitor for patients who cannot tolerate allopurinol, this may be due to severe renal impairment or any side-effects. Colchicine 500mg once to twice daily should be considered as prophylaxis against acute attacks resulting from initiation or up-titration of any ULT and continued for up to 6 months.

Given the large range of deleterious conditions and outcomes associated with gout it is vital that it is recognised early and treated optimally. Once the uric acid remains under control with ULT patients should remain gout free and have a significant improvement in their quality of life.

The information you provide in this contact form is emailed directly to Surrey Total Health. Your information is not stored by this website. We only use your details to respond to your enquiry and do not share them with any third parties. You can read further on how we store and process data in our privacy policy.